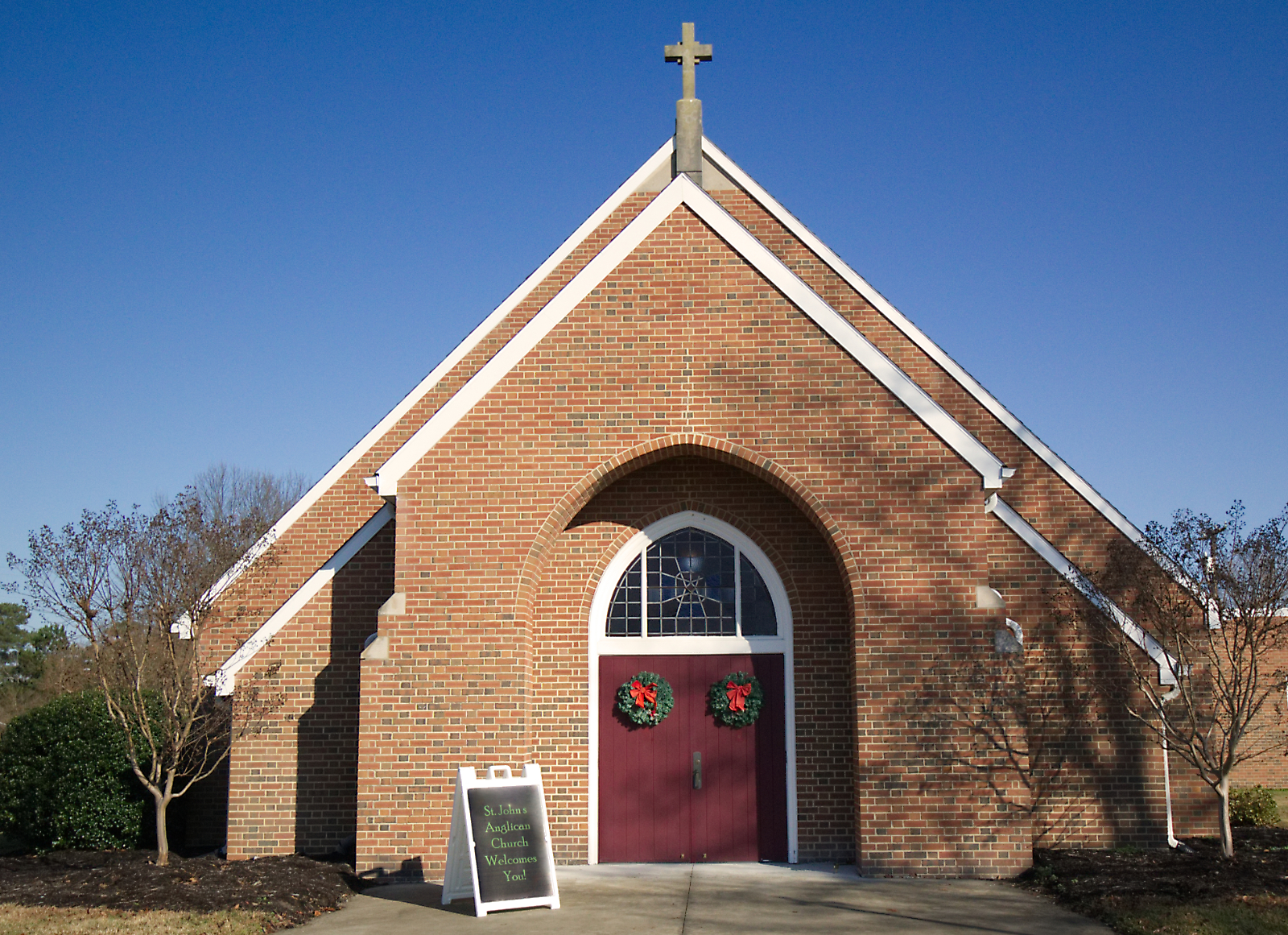 Our faith is revealed in the Bible, summarized in the Apostles’ and Nicene Creeds, and taught by the Fathers and Councils of the early Church. We worship using the traditional Anglican/Episcopal Book of Common Prayer (1928 American edition) with music and hymns from the rich treasury of Christian hymnody.

At St. John’s we seek to develop and nurture Christ-centered lives and to build up faith in Jesus Christ through worship, prayer, the sacraments, Bible study and Christian education, preaching, outreach, friendship, and good stewardship of the time, talents, and resources God has given us.

Our goal is to be a vibrant and transformational orthodox Anglican church in South Hampton Roads and to share the rich treasure of the classical Anglican Way of Christianity with the people of our area. We cordially invite you to join us!

Saint John’s is a parish of the worldwide Anglican Catholic Church, which was established in 1978 to continue the faith and worship of the One, Holy, Catholic, and Apostolic Church as received through the Church of England and the U.S. Episcopal Church in the days of their orthodoxy.

People are sometimes confused by the name “Anglican Catholic Church.” To understand this term, we must recite some history.

In 1977, an international congress of nearly 2,000 Anglican and Episcopalian bishops, clergy, and lay people met in St. Louis, Missouri, to begin the process of establishing an orthodox jurisdiction in which traditional Anglicanism would be maintained. These actions were taken in response to the increasing liberalization of the Episcopal Church and the Anglican Church of Canada that had occurred throughout the 1960s and 1970s, and which culminated in the ordination of women to the priesthood and episcopate and the radical revision of the historic Book of Common Prayer.

The participants in the St. Louis Congress sought to maintain their classical Anglican and Episcopal heritage by returning to the fullness of the Faith of the undivided Catholic Church. Acting according to the principles determined by the Seven Ecumenical Councils of the ancient Church and adopting initially the name “Anglican Church in North America,” they placed themselves under the jurisdiction of the retired Episcopal bishop of Springfield, the Rt. Rev. Albert Chambers.

In January 1978 Bishop Chambers expanded this jurisdiction and guaranteed its continuance by consecrating four bishops for the newly formed Anglican Church in North America. In October 1978 the Church met in synod to adopt a formal constitution, which included the change of name to the “Anglican Catholic Church.”

Today the Anglican Catholic Church is a worldwide body with dioceses in the Americas, United Kingdom, Australia, New Zealand, South Africa, Haiti, and India. St. John’s is a congregation in the Diocese of the Mid-Atlantic States under the jurisdiction of the Rt. Rev. Donald F. Lerow.

We thus trace our origins back through the Episcopal Church and the Anglican Church of Canada to the Church of England and the ancient British (Celtic) Church. This Church has produced such well-known Christians as C.S. Lewis, Shakespeare, and St. Patrick, as well as the King James Bible and the majestic Book of Common Prayer. The Anglican tradition came to America with the first English settlers, who landed at Cape Henry (now part of Virginia Beach) in 1607 along with their chaplain, the Rev. Robert Hunt.

We believe in God the Holy Trinity (Father, Son, and Holy Ghost) and the orthodox Christian Faith of the One, Holy, Catholic, and Apostolic Church. Our Faith is rooted in the Bible, summarized in the Apostles’ and Nicene Creeds, taught by the Fathers and Doctors of the Undivided Church, defended and defined by the Great Ecumenical Councils, and demonstrated in the lives of the Saints.

We believe that God sent His only-begotten Son, Jesus Christ, into the world to save mankind from sin and eternal death and to make it possible for human beings to be reunited with God the Father. While remaining fully God as the Second Person of the Holy Trinity, Jesus Christ became a man and was born of the Virgin Mary. Jesus called His Apostles and taught them before His crucifixion and death; after which He physically rose from the dead and, 40 days later, ascended back into heaven.

On the Day of Pentecost, 50 days after Jesus’ resurrection, the Holy Spirit came down on the Apostles and others gathered in prayer in an upper room in Jerusalem; and it was at this time that the Christian Church, the “New Israel,” came into existence. The Apostles passed on the Faith they had learned from Jesus Christ to the early Church.

Our Worship and Ministry

We worship Almighty God using the time-honored traditional liturgy of the 1928 Book of Common Prayer. In addition to being a masterpiece of English prose, the Book of Common Prayer provides an ancient Catholic pattern for public worship, pastoral services, and regular reading of the Scriptures.

We also maintain the ancient all-male Apostolic ministry of bishops, priests, and deacons, and we practice the sacraments of Baptism, Confirmation, Holy Communion, Penance, Unction of the Sick, Holy Matrimony, and Holy Orders.

We seek to develop Christ-centered lives through worship, the sacraments, prayer, Bible study, compassion, fellowship with other Christians, and regular financial support of the Church.

We believe the Bible to be the infallible, divinely inspired word of God containing all things necessary for salvation. The Bible, or Holy Scriptures of both the Old and the New Testaments, is the authentic record of God’s revelation to man and is valid for all people and all time. In the Bible we have God’s revelation of Himself, His saving activity, and moral demands.

To understand and interpret the Bible, we look to the writings of the early Church Fathers as well as the decrees of the Ecumenical Councils of the undivided Church. We are also guided by the Canon of St. Vincent of Lerins (A.D. 434): “In the Catholic Church we take the greatest care to hold that which has been believed everywhere, always, and by all. For that is truly and properly ‘Catholic.'”

We believe in the sanctity and dignity of all human life and in traditional Biblical standards of morality. We believe that life begins at the moment of conception and that the willful taking of life by abortion is a grave sin. We also believe in the family, in the God-given sacramental bond in marriage between one man and one woman. We profess that sexual activity is to be practiced only within the bonds of Holy Matrimony.

We gratefully acknowledge Jesus Christ as our Lord and Savior and as the only sure hope of salvation and eternal life. For this reason, we desire to share the wonderful Good News of God’s love for us in Christ with our family, friends, neighbors, and acquaintances through prayer, outreach, friendship, and service.

We are dedicated to St. John the Evangelist, the Beloved Disciple of Jesus who wrote the Gospel of John, three New Testament Epistles, and the Book of Revelation. In St. John’s Gospel, Jesus tells his Apostles, “No longer do I call you servants, for a servant does not know what his master is doing; but I have called you friends” (John 15:15). That’s how we want St. John’s to be, a group of friends of the Lord Jesus and of one another.

The Mission of Our Church

At St. John’s we believe that every Christian has an important role to play within the life of the Church and in outreach to our neighbors and community. Ministry opportunities include

Some of the organizations St. John’s supports:

Coronavirus (COVID-19) Update: All public worship services at the church have been suspended until further notice. We are currently praying Morning Prayer and having Bible study via Zoom on Sunday mornings.

This Site Is Protected By
Shield →