Pentecost is one the three great feasts of the Christian Year (the other two being Easter and Christmas). It celebrates the descent of the Holy Spirit on the Apostles and other disciples in the upp 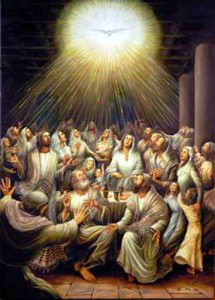 er room of a house in Jerusalem, as recounted in today’s Epistle reading from the Book of Acts. It is also sometimes called the birthday of the Church. The Jews of the Old Testament period kept the feast of Pentecost, which was called the Feast of Booths, or Weeks, to commemorate the anniversary of God’s giving the Law to Moses on Mount Sinai as well as the spring harvest in Israel. Pentecost is a Greek word meaning “fiftieth” and referred to the fact that Pentecost always fell on the fiftieth day after Passover. For Christians, Pentecost occurs fifty days after Easter. The common English word for this feast, Whitsunday, is said to derive from “White Sunday,” so called because of the white robes worn by newly baptized Christians, as Pentecost was a popular day for baptisms in England during the Medieval period. Whitsunday may also derive from the word wit, an old word for “knowledge,” which the Apostles received on this day.

This Site Is Protected By
ShieldPRO →